There are very few on the planet more deserving of a handmade card than our dedicated men and women of the armed forces. With some help from the patriotic All American collection of Bella Boulevard and her Sand and Surf stamps this card came together in a snap. 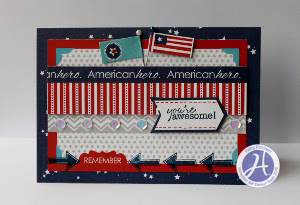 The card base was cut from the Bella Boulevard United We Stand Paper. Then I cut out the “Remember” Cute Cut from the Borders & Cute Cuts paper as the main mat and added the stamped arrows in navy ink. Then I adhered it to the card front and began layering a few border strips leaving the American hero one and red stripes attached together and adhered with 3D pop dots. Then I cut out the grey chevron border strip and added it below the other two as shown.  Using the navy ink and white cardstock I then stamped the sentiment “you’re awesome” and set aside to dry. 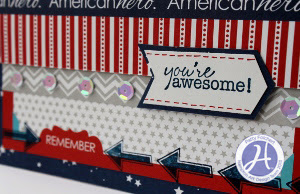 At that point I added some bling in the form of white sequins on the chevron strip as shown with glue dots. I made the American flag from the “United We Stand” paper cutting it out and mounting it onto a blue pearl topped straight pin. The other flag was a Bella Boulevard patriotic flag, both were inserted into a foam dot in the upper center of the card as shown.  Then I cut the sentiment into the chevron arrow shape and layered it onto the navy paper and cut it out. Using a red marker I added the faux stitching on the edges and then attached the sentiment with foam dots to the card front on the right side.
So set aside some time to create a card for an American hero in your life, or for one that is a complete stranger. There are several organizations that make cards just for our military and send them all over the world. They do it for the express purpose of sharing support and expressing gratitude for the difficult jobs that they take on every day to protect this great nation.  Some of those organizations even create cards for the military workers to send back home to their families for celebratory events, great idea right!  I am listing the organization I am familiar with below in case you’re interested in joining the ranks of card makers for our armed forces.

Join me in Saluting Them,
Patty

Posted by Kimber McGray at 8:00 AM

Click the image to visit
our license partners blogs: 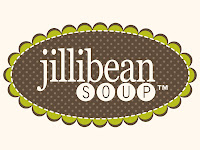